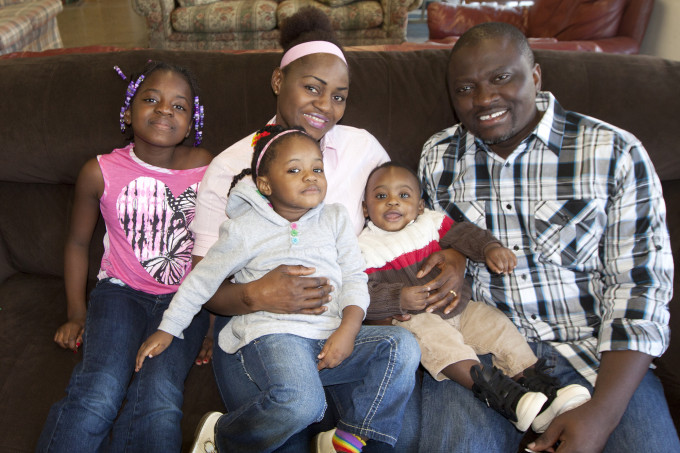 Issa and Anthonella grew up in Kinshasa  (DR Congo).  They met at the University of Kinshasa and began a family.  In the Congo, Issa was an assistant professor at the University of Kinshasa and also worked with the United Nations Development program.  Anthonella began her career as a journalist, but has since become a stay at home mom for their three young children Shammah (7), Elyona (2) and Barukh (7 months).  The Issantu-Banaciny family came to the United States 6 years ago, and Issa has been employed by Caterpillar since their arrival. Despite his steady work history, local banks have told him his income it too low to qualify for a conventional loan.  He approached Habitat in hopes of qualifying as a partner family.

One of the most interesting parts of Issa and Anthonella’s story is their long family connection to Habitat.  According to Issa  “to the best of my knowledge, one of Habitat for Humanity’s first out of US builds took place in Zaire (actually Democratic Republic of Congo/DRC) around 1973. My mother was involved in a local church program that (with the help of American missionaries) built their own home and helped to build dozens of Habitat for Humanity houses.  In the county of Selembao (a township of the capitol city of Kinshasa) this area is still called “Habitat”. As families grew a lot of those Habitat houses were modified and occupants made them look different, but the area is still called “Habitat”. Those who live there presently have purchased them from former Habitat for Humanity occupant-builders.”

Growing up in a home his parents built has left a lasting impression on Issa—and one he intends to pass along to his children.  Issa continues, “My parents are both 69 years old and repeating my parents experience (building a home with Habitat) is not just a coincidence– it is a consequence of a long process that has transformed me since my childhood.  I firmly believe in passing this experience along to my children as we seek to belong to this community through our partnership with Habitat.”