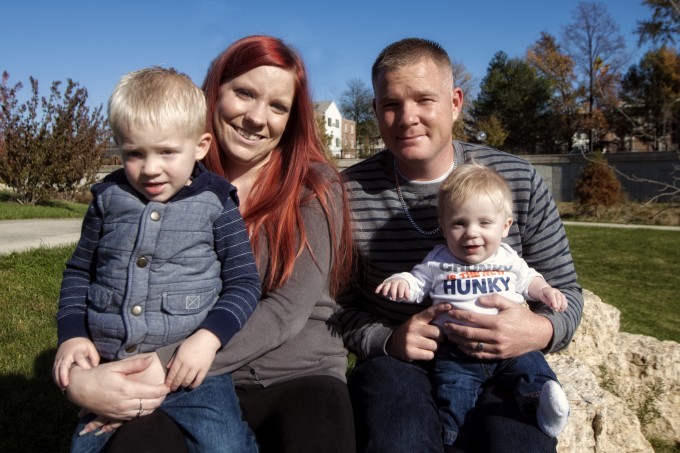 April Adams and Bobby Hart have been friends since 1st grade. They both grew up and attended Urbana schools. When Bobby enlisted in the army, he didn’t expect to be deployed for two tours in the Middle East. His service took him away from Urbana– and April– until 2011 when he retired with a medical discharge. April worked as a waitress in various local restaurants and completed her Social Work degree through Parkland College in 2011.

A “Happy Veterans Day” wish from April via Facebook brought them back together when Bobby returned to the states. They now have two children; RJ who is 2, and Preston who is 3 months. Bobby also has two children from a previous marriage, Noelle 7 and Calleigh 4 who live in Texas. Bobby is currently working as a drill instructor at Lincoln’s Challenge in Rantoul and is also attending Parkland College, studying criminal justice.   April has been working at Carle for the past few years. They have very supportive families in the immediate area who are helping them with their children as each put in their 250 hours of sweat equity in their new Habitat home.

April and Bobby looked to Habitat because they did not feel safe living in their current neighborhood, and they were eager to find a safe location to raise their boys. Their cars have been vandalized, drug paraphernalia is visible in the common parking areas, and there have been some shootings not far from their home. “It’s sad to tell your child he can’t go outside because it’s not safe, “says April. “I think I am most happy that our kids will finally have a yard to play in. We can have a lot more outdoor time and learning experiences together”.

Bobby says, “April and I can now give our boys something we didn’t have as kids– the chance to live in our own home.” This opportunity with Habitat has helped refresh his faith in humanity. “When I was in Haiti (on his final assignment), the people had next to nothing, but they always had a smile on their faces. When people gripe about not having this or that back here in the states, I just think back to those smiling Haitian people. They appreciated life, and everything about it.”

April reflected back on how this opportunity is already bringing hope and happiness into her life. “I’m more positive about things. I think that’s because I see all the hard work that people do for others they don’t even know.   I’m meeting people through this experience with Habitat that are selfless and kind. The houses are being built by volunteers who take time from their lives to help strangers—that’s’ special to me.”

Both April and Bobby said they will want to thank the volunteers on their home in a special way. Bobby would host a hog roast in their backyard for the people that helped build the house. April would want to invite everyone that helped make this possible. “I’d like for them to relax and let us give back to them in some small way.”